For a great many people, the evening is the most enjoyable part of the day. Perhaps, then, there is something to his advice that I should cease looking back so much, that I should adopt a more positive outlook and try to make the best of what remains of my day. (Stevens in The Remains of the Day). 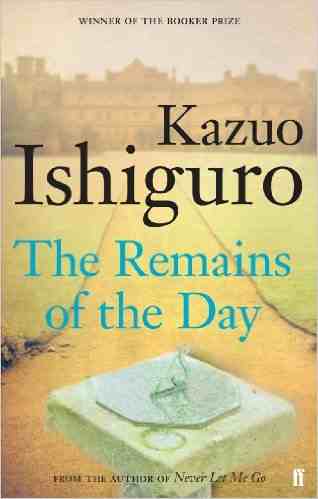 Winner of the Man Booker Prize for Fiction in 1989, Kazuo Ishiguro’s, The Remains of the Day focuses upon life in a Great English House during and after the world wars. The narrator, Stevens, is an ageing butler who recounts the experiences he had in the house under the owner, Lord Darlington, a man for whom he comes to respect for his galvanizing of relations between the English and Germans after the war.

As in the 1993 film adaptation (which was nominated for eight Academy Awards with Academy Award Winners, Sir Anthony Hopkins and Emma Thompson taking the lead roles) the book is also preoccupied with the relationships Stevens has with the house keeper, Miss Kenton and his father; relationships which are displayed as professional but which in fact have much more going on under the surface.

Ultimately the story is one of love, loss, ageing, dignity and regret as well as looking back at the past. The story does take time before the plot begins to unravel; (the opening chapter has, at times, rather long though beautifully written descriptions of the rural English landscape surrounding the house and neighbouring countryside. The main plot however begins when Stevens shares his experiences of the international meeting that took place in the house. The meeting was arranged by Lord Darlington as a means to put a stop to the mistreatment of the Germans by the English after the war. Many poignant moments take place during that meeting as the story begins to pick up pace thus generating more interest for the reader.

Born in Nagasaki, Japan but an English resident for many years, Ishiguro captures the English countryside along with the functions within a Great English House in a remarkable way. His characterisation of Stevens and Lord Darlington as men from the established middle-class elite in contrast to the blue-collar working-class villagers in the neighbouring countryside is both cleverly written and believable.

In the end, The Remains of the Day is a tale which gives some good insight on a period of English history and cements Ishiguro’s position as one of the best writers to have emerged during our modern times.