Its now been 3 days since a horrific fire, the cause of which is yet to be determined, has consumed a tower block in London. Grenfell Tower, in North Kensington, has experienced the results of a devestating fire. As the flames continue to slowly burn at the remains of the tower, sadness has suddenly turned into anger as local residents along with concerned members of the public demand to know why no precautions had been made to prevent such a disaster happening in the first place.

As details begin to emerge of the number of those who have lost their lives in the tragedy, a clear pattern is developing of the lives of those who lived inside the 24 storey high tower block. This major incident comes just days after a General Election result saw the Labour Party snatch control of the London borough of Kensington, a generally affluent area, out of Conservative hands. However, it has emerged that many of the residents living in Grenfell Tower had been from low income, working-class and migrant backgrounds. Could this perhaps be one of the reasons why residents concerns to the council and local government officials regarding the safety of the tower block were ignored?

Reports suggest that residents had raised the alarm about safety of the tower block over a year ago but there was no response to it. A recent refurbishment to the tower block at an estimated £10m did little to prevent the fire which claimed 17 lives, with one of those now being formally identified as Mohammed Alhajali – a 23 year old Syrian refugee who was in the final year of a civil engineering degree. Speaking to BBC News, his brother, Omar, said: “I was led out of the building with others thinking that he was behind me. When I got outside and realised that he was not with us, I called him on my phone and asked him where he was. He said he was still inside the flat. When I asked him why he had not followed us out, he said that no one had come for him.” Omar, 25, then broke down as he said: “My brother then said why had I left him there.” Sadly, that was the last of the brothers conversation. 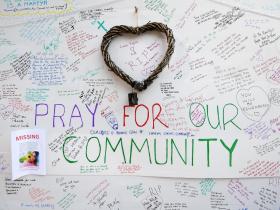 Members of the public, along with those living just a few yards away from the site are writing messages of condolence to the families of those who have lost loved ones, while thousands of pounds have been donated towards those needing to be rehoused having lost everything but their lives in a tragedy which has gripped the nation.

London Mayor, Sadiq Khan, working alongside the investigative forces, has vowed to get to the bottom of this incident while Prime Minister, Theresa May, who paid a private visit to the site, offered her personal condolences to the families and those affected.